Solution home General How to / Tips and Tricks

Embed Twitter Timeline into Your SharePoint and Office 365 Pages Print

A workaround solution to make the Twitter timeline work always is by loading Twitter javascript file dynamically instead of embedding the script tag using HTML. The following steps explain the solution in details:

You can find details on how to create embed code for your Twitter timeline from here.

Type the name of the generated ShortPoint (e.g: Twitter)

In the rich text editor, switch to the code view and paste the Generated HTML from Twitter APIs excluding the script tag,
Your code will look similar to the following:

You can change the height using the data-height property:

When you paste the Twitter HTML into the editor, make sure to remove the <script> tag, as we're going to load that JavaScript file in a different way next.

Now Save the Generated ShortPonit

Edit the page where you want to add the Twitter Timeline and add a Script Editor Web Part (anywhere in the page):

It does not matter where you actually place the Script Editor Web Part, as it will be invisible to end users, and it's only required to load Twitter's javascript file dynamically.

On a new browser tab, open the link load-twitter.js (or load-twitter-in-tabs.js if you want to put the twitter inside tabs element) and copy the content of the Script File

Note: If you are planning to put the Twitter feed inside a Tabs element, then you need to copy the content of this script (load-twitter-in-tabs.js) instead 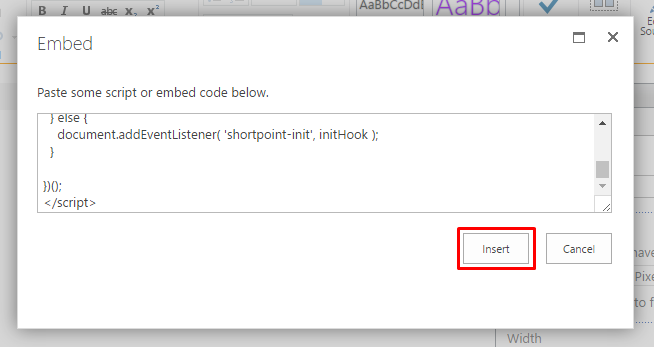 We're almost ready, the only thing that is left, is to place the new ShortPoint we just created in the place that we would like the Twitter Timeline to appear.

On the same page, Open the ShortPoint Insert Button

Search for the Generated ShortPoint we created in Step 1 ( e.g: we named it here twitter ), and Click on it

Then Click Insert to add it to the page 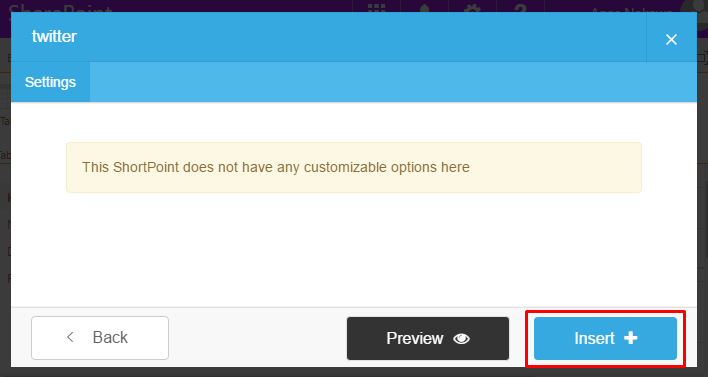 Save the page, and you are done. 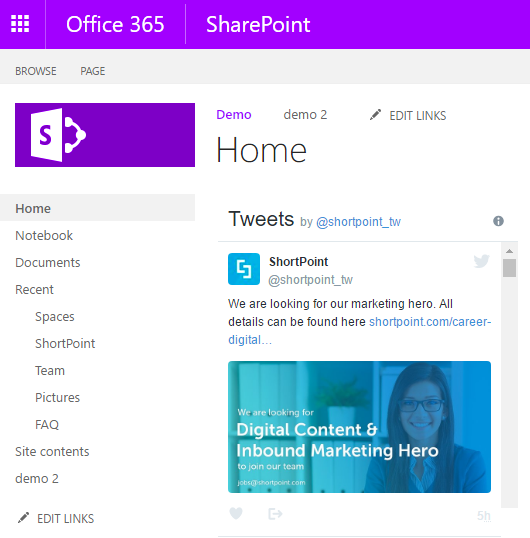 You can add your new ShortPoint into other ShortPoints as well, like Panel for example.

Soon, we will release Twitter ShortPoint that should make it much easier to add and control twitter timeline and also tweets.

Q: Twitter feed does not render on IE, why?

A: Make sure that your master page targets the very latest document mode of IE, refer to the following article to know how to do that